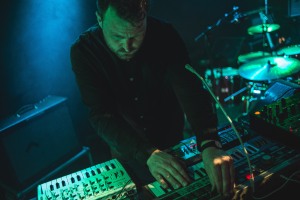 Raderkraft is a project by Willem Stinissen (1980) from Amsterdam, the Netherlands. The music Raderkraft makes is best described as electro minimal synthwave.

His love for this genre started as an implication of his punkrock background. He’s been fascinated by electro and synth music since the electro revival a.k.a The Electroclash back in 2000. Later he became more interessed in the roots of this sound: early 80s (pre-midi) synth and new wave music.

Simplicity, minimalism, purity and D.I.Y. mentality are the aspects of wave music he loves the most.

Raderkraft is a Swedish word and means “power lines” or “revolving power” in German. Raderkraft loves to use repeating and revolving sounds in his music.

In May 2015 Raderkraft was selected by Converse Rubber Tracks to do a studio recording session in The Amsterdam Recording Company guided by English producer Alan O’Connel. As a result of that experience Raderkraft was also selected by Chelsea Wolfe to support them in the North Sea Jazz Club Amsterdam.

In April 2016 Raderkraft met legendary dutch dj and producer Eddy de Clercq during a gig in Club Canvas Amsterdam. Eddy was fascinated by Raderkraft’s sound and wanted to release his work on his label Testlab Records.

Digital downloads are available via Bandcamp

Raderkraft impresses with his powerful analogue sound floating somewhere in between electro, new beat and wave